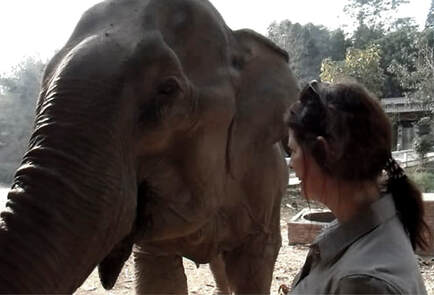 I first began painting as a hobby; it turned into something more when I realised I could use my work to raise funds for animal charities. Whilst conservation of a species is enormously important, I have always also felt a strong desire to help the individual animal. When you hear that every twenty six minutes an African elephant is poached for its tusks, it’s easy to lose sight of the fact that each one of those deaths is the loss of a magnificent animal.

I think this is what has influenced my style of painting. So rather than see a distant herd of zebra on the plains, I want the viewer to connect with individual animals; to get a sense of their character and soul; a portrait of those animals.

Whether it’s the intricate patterns of a leopard’s spots, or the folds of an elephant’s skin, these details are there for a reason of survival, so I strive to recreate them accurately. But I also love a certain style of abstract painting, and this influence can be seen in my backgrounds, where the oil paint is applied with a knife in a more expressive style, complementing the subject.

​                When one of my paintings hangs on someone’s wall, I want them to have the feeling that the animal is there in the room with them and to really connect with the individual and experience just a little of the beauty of nature, along with the enduring beauty of fine art.

Illustration for 'Not Near Normal: The Paranormal, Half Human Monsters and other Fiends' by Ruth Owen. Bearport publishing New York

Invited to exhibit alongside David Shepherd at The Wey Gallery, Surrey


2016 –Produced portrait for Paul O'Grady of him with 'Archie' an orangutan orphan at Sepilok Rehabilitation Centre,  to commemorate Paul becoming Patron of Orangutan Appeal UK

Artwork featured in Dorset Magazine raising funds for Save the Elephants

Invited to become an ambassador for Orangutan Appeal UK

Commissioned  to design the front cover for the Lyme Regis Regatta program.

Invited by David Shepherd Foundation to exhibit at The Mall Galleries, London

Invited to exhibit  at Slimbridge Wetlands Centre, in aid of the Wildfowl and Wetlands Trust

2020 – Finalist in David Shepherd Wildlife Artist of the Year

Watercolour illustrations for ‘When Little Mouse got Stuck’, one of a series of picture books exploring conservation themes,  publishing in 2022
​ by award winning children's publisher Ruby Tuesday Books